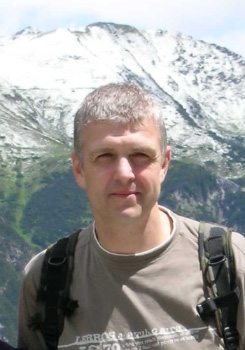 I live in Erdweg, a small village in Bavaria/Germany, 30 km northwest of Munich. My images are taken from my balcony, in the middle of a housing area with some disturbing street lights and other light pollution.

By profession I am a master optician and contact lens specialist, my optical knowledge is very helpful for my work in astroimaging. I have been interested in astronomy since my childhood. However, my passion for astronomy only began in the year 1997 with the impressive comet Hale-Bopp. In 1999 I could observe the total Solar Eclipse. Therefore I bought some astronomy books and informed myself on the Internet. From the first moment since I was inspired by those wonderful images. Some times later I finally was able to start astronomy with my first telescope, a 8" Newton Vixen R200SS on a Vixen Great Polaris DX.

With this telescope I observed the moon and the sun, planets and many deep sky objects. At the beginning I only observed visually, after about one year I became more and more involved with astrophotography. After the first promising attempts with an analog SLR camera, I started to deal with digital astrophotography from 2004 onwards. The first monochrome CCD camera, a SBIG ST2000XM was mainly used with my 4.5" Newton and 12" Meade ACF. The purchase of this CCD camera was a very good decision. It was much easier to take better images under my light-polluted sky, the quality improved enormously.

In the last 20 years different equipment has been used. Currently I mainly use a 10" Lacerta Newton and a 4.5" Newton on a 10Micron GM1000 HPS mount. Together with a SBIG ST8300M CCD camera these are very good setups. My main interest is the imaging of Deep Sky Objects. Astrophotography is a wonderful hobby, it is absolutely fascinating to bring faint objects of our universe to life with the help of digital image processing.

For any questions or comments please send a mail to: m.deger@galaxyphoto.de